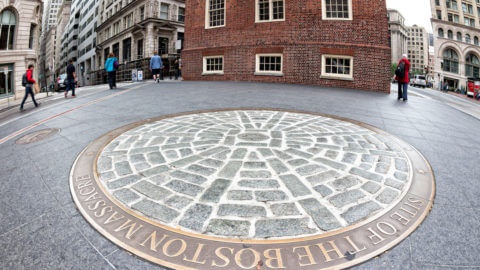 Students will use primary sources to detect propaganda.

1. Have students define "Massacre" (noun) from www.dictionary.com. Explain to them that they will be learning about the Boston Massacre. Referencing the definition, ask students how many people they think died in the massacre. They should be guessing high numbers. Then, let them know that only five people died.

2. Discuss: If the definition of a massacre is "the unnecessary, indiscriminate killing of a large number of human beings or animals, as in barbarous warfare or persecution or for revenge or plunder" Why would an event in which only 5 men died be called a massacre?

3. Students will look at both engravings (in the links) and identify the difference using the analysis questions below. They can do this through a class discussion or by making a list on a google doc.

PAUL REVERE ENGRAVING  (1770) PRIMARY SOURCE 1. Who are the aggressors in this engraving by Paul Revere? 2. Who looks innocent? 2. Where is Captain Preston, the British commander? What is he doing? 4. Describe the crowd—its size, composition, and location. 5. What is the crowd doing? 6. What time of day is it?

ALONZO CHAPPEL PAINTING (1770) PRIMARY SOURCE 1. Who are the aggressors in this engraving by Alonzo Chappel? 2. Who looks innocent? 2. Where is Captain Preston, the British commander? What is he doing? 4. Describe the crowd—its size, composition, and location. 5. What is the crowd doing? 6. What time of day is it?

4. Use the Paul Revere interactive link to see why Revere painted what he did. Read the page. Hover over parts of the picture to see his purpose.

5. Have students watch the video on the Boston Massacre that is in the attachments.

6. Answer these analysis questions as a class or on a google doc:

A. Why did several people who witnessed the same event recall it differently? What does this                 phenomenon tell you about the study of history?

B. Do you think Alonzo Chappel's picture is more accurate? Why?

C. What other information would you want to know about the images to better understand the Boston Massacre?

D. It is very important to know who made these images, when they were made, and why they were made. Because they are primary sources, these images show the author's perspective in it. This can lead to making propaganda that tries to influence people. Do you think this happens today?

Students will use primary sources to detect propaganda.